Archie ‘A’
George and I had been talking for some weeks about buying a small dinghy. It seemed to make more sense than trying to buy a car; something we could never have afforded anyway. Paddy had news of a boat for sale on PM and we set off on a weekend ‘adventure’ to buy her and sail her back to Hillsborough. My diary entries read as follows:
Sat. 13th January 1968
‘I picked up Paddy early morning. It was raining as we caught the bus to Windward. Barnabus (Bethel) was on board and he tried to undermine my confidence by predicting (humorously) Paddy would never get us round Gun Point.
No boat was going over to PM from Windward and it seemed as if our venture would stall even before it had begun. However, we met Captain Bill and one of his men, Tom, offered to sail us over. At 11.15am we set off; the wind coming from the east and backing to north-east. We had to tack up to the reef, run down behind to the gap in the reef, then heave close to the wind and force a way through to open water. We all got soaked but it was great fun.
It took just over an hour to reach PM with Paddy and Tom chatting and laughing all the way. Once we had landed Paddy and I went to his dad’s house for a bite to eat. Tom left us just past the church and set a course up the steep path to his home.
It continued to rain and about 4.00pm Paddy and I set off to view the boat. Mrs Mitchell greeted us from her kitchen and came out prepared to do business. She made no messing and the deal was done quickly. In less than five minutes we were rigging ‘Archie’ ready for the sail to Windward.
‘Jack Iron’ Celebration
Archie seems to be a popular boat because a number of neighbours appeared to protest at her being taken away. Amidst the protests I picked up the word ‘celebration’ and I collared a couple of boys and sent them off to buy a bottle of ‘jack’. The gesture seemed to meet with everyone’s approval and after every plank had been wetted and toasted we were given a warm send off as we set a course for Windward.
We ran downwind all the way and it was almost dark when we arrived at the jetty. A number of people came down to greet us and help us haul Archie up the beach. From the comments it would appear Archie is considered a bit of a prize. Tomorrow she will have to prove her capabilities when we sail her round Gun Point to Hillsborough.
Sunday 14th January 1968
Gun Point
I was pretty tired this morning. I slept very little last night and when I woke up I had something of a bad head. Paddy, George and I caught the bus to Windward. Paddy sat beside me smoking a cigarette and George chatted to a lady opposite. The bus was packed with people on their way home from church. I tried to catch some sleep but, of course, with the noise and bouncing, that was impossible.
Archie lay down by the jetty and with three of us rigging her we were soon ready to launch. The wind was, again, blowing from the east, the sky was clear and it looked as though the weather might be on our side.
With the jib unfurled and the mainsail set we tacked our way beyond the reef into deeper water. We turned towards Gun Point and ran downwind. The wind filled the sails and the rudder vibrated as we sped along; most exhilarating. As we came up to Gun Point the waves seemed to come from all directions and our position became a bit more exposed. The waves that rolled up from behind seemed to pick us up and carry us along with a tremendous rush until they overtook us, leaving us feeling almost motionless in the valleys between. At the top of the waves we could see for miles, at the bottom we could only see the wave in front and the one behind. Every time a wave picked us up then dropped us I felt as though we were about to be swallowed up.
We were now well out to sea beyond Carriacou and I could see Paddy was trying to decide when to change course. The waves were still quite high and the currents strong so when he did finally give the command to ‘come about’ we had to be quick. In the end it was smooth and easy and we all breathed a little sigh of relief.
Bogles ‘Flaws’.
‘God was willing’ as Carriacouans might say and we ‘drove’ down to Bogles on a broad reach. Paddy was well aware of the ‘Bogles flaws’. Locals had, for days, been telling us that they were notorious in the Grenadines. Below the hospital is a narrow gap through which winds seem to be squeezed. They come down in swirls and strike from all directions. We ducked under the boom so many times my head began to spin. We could have been upside down for all I knew and Paddy just sat at the tiller and grinned.
With Bogles behind us the rest of the journey was easy and Paddy gave me the tiller for the last few miles to Hillsborough. I’m not sure if that decision won George’s approval.
Well, we now have Archie ‘A’ beached under the manchineal outside the house, with the mast tied to the veranda, the rudder hanging off the wall and ropes all over the place. We are feeling pretty good with our weekend’s work and look forward to sailing her in the months to come.’ 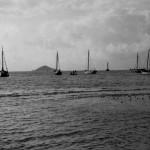 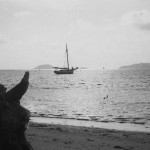 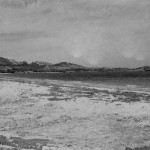 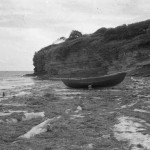 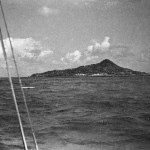 Sailing from Windward to PM. 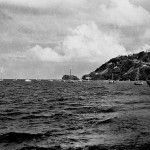 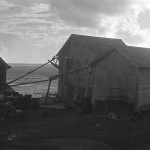 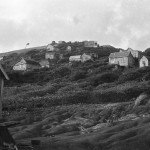 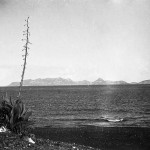 Looking towards Union Island from PM. 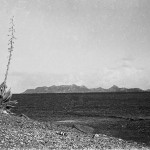 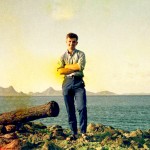 Gun Point. (On Carriacou but part of St. Vincent.) 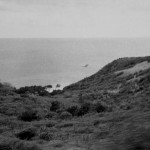 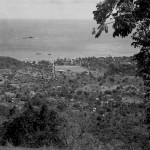 The Airstrip, Mabouya and Sandy Isle. 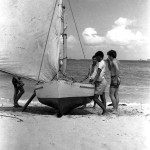 Archie ‘A’ with Barnabus, Raphael and George. 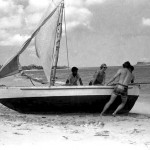 Launching Archie ‘A’ with Amigo’s bar in the background. 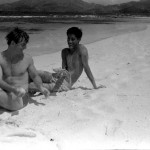 7 Responses to Archie 'A'