If I thought Christmas had been a hectic round of feting and celebrations it hardly prepared me for the New Year festivities. With Christmas hardly over we were thrown into a headlong flight towards Old Year’s Night and New Year’s Day, as my diary notes suggest.

“A stroke of good fortune took me back to Petit Martinique today. Leo and ‘the boys’ (i.e. Sunblisters) were due to play at a dance on PM and Leo asked if I would like to go along. I jumped at the chance and we trundled off to Windward in a truck laden with equipment and liquor. Once we reached Windward everything was transferred to the boat and we made our way across to PM where the cargo was transferred on to the jetty and hauled up to the hall.

The dance went off extremely well. I served behind the bar for the whole night. Everyone I met was amazingly friendly. The dance finished around 2.00am and when the crowds had dispersed we pulled out the benches to use as beds.

I had just got my head down when I heard a loud banging on the door. It turned out to be a guy I’d given a dollar to earlier in the evening so he could buy himself a quart of jack (enough to fill a coke bottle). He’d walked home after the dance, and had then immediately returned to pay me back the dollar. I was very impressed. Back to the bench and slept ‘til 6.00am.”

“The band returned to Carriacou and I took up Paddy’s invitation to stay and celebrate New Year on PM.

Paddy’s family home is on the north of the island. A constant refreshing breeze blows through the house that his father built around 1936. From the front window you look over to Petit St. Vincent and beyond to the Atlantic. It is an ideal vantage point from which to catch sight of any squalls coming down from the Horse Latitudes. The coast is wild and beautiful and the people work incredibly hard to make a living from the sea.

Old Year’s Night and New Year’s Day appears to be a time of constant feting here in PM. We started off in a small house on the western side of the island. Paddy knew I was looking for a small sailing boat and he told me our hosts had a boat for sail i.e. Archie ‘A’. After a brief discussion I bought it on the spot with a promise to send up the money in a couple of days. We shook hands and ‘fired one on the deal’.

The party seemed endless. At midnight I accompanied Paddy to midnight mass. Afterwards we followed the Serenading band and visited about 20 different homes. The welcome was the same in every one. When Paddy and I left at 6.30am to go home the band was still playing and when I woke up at 8.30am I could still hear them going strong somewhere in the distance.

I returned home on the ferry with Father Fitton and arrived in time for lunch. We had a large crowd today for lunch including Mr and Mrs Alleyne with Goot’s  brother-in-law and new wife. They are spending their honeymoon here in Carriacou.

Once lunch was over I walked down to the jetty where I met up with Leo and the boys as they were about to leave for Union Island for yet another dance. I didn’t have to be asked twice if I wanted to join them.

The sight of Union had often intrigued me and I had longed to visit for some time. It did not disappoint. We approached the quiet lagoon, the palm clad beach and the lofty spires of ancient volcanic rock and landed the equipment on the concrete jetty. We were met by a Landrover and taken to our destination; a hall with no lighting and a stage at one end. We set up a generator outside to provide the electrics for the lighting and the band.

The dance was tremendous. The Sunblisters played magnificently and at different points during the night everyone in the band swopped instruments. I worked behind the bar and the only incident of any note was when a very drunken guy came to the bar with a few friends and said, ‘Don’t give me no eye white man’ and then added, ‘I don’t trust no white man, no’. Fortunately, at that point two very beautiful lasses wandered past and his friends pointed him in their direction. He staggered off full of hope. They didn’t come back.

Once again, when the dance was over, we grabbed a few hours sleep on the benches and woke early to return home. The boat was late but when it arrived I just lay down and slept. I didn’t wake up until we put in at Hillsborough. There I found George and Cathy about to leave for Grenada. I could have gone with them but I had promised Paddy I would wait until Thursday to sail ‘Archie’ down from PM. 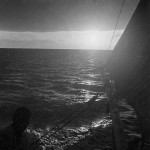 Late afternoon Sun on the way to Union Island. 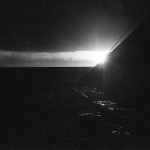 Near to Sunset on the way to Union Island. 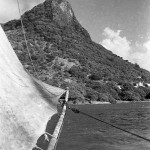 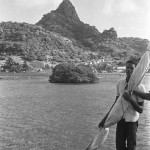 Sailing in to Ashton Harbour.

Approaching the jetty at Union. 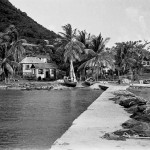 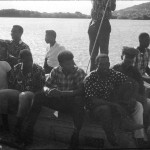